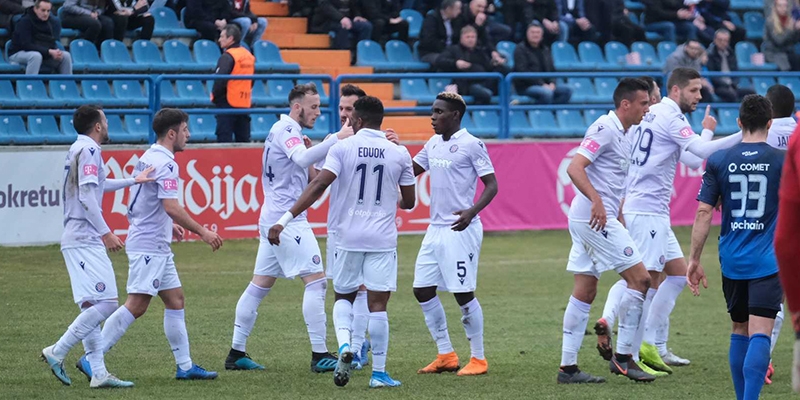 90+2 Tihomir Pejin is using VAR for checking a possible penalty kick for Hajduk. Jakoliš was fouled in the penalty box, penalty kick awarded to Hajduk.

79 Hajduk making the second substitution:  Kreković on, Jairo off.

77 Varaždin making double substitution:  Glavica and Petković on,  Drođek and Posavec off.

72 GOOOOOOOOOOOOOOAAAL Hajduk leads 2:0. Caktaš took another penalty kick and this time he scored.

70 Another situation for VAR. It seems that Stolnik will be sanctioned for handball.

69 Nevistić saves  Varaždin once again. Jradi took a corner kick, Vučur passed a header to Eduok but home team's goalkeeper was in the right place.

54 Tahiraj's attempt from 14 meters finished on a goal post!

46 The second half has started, Varaždin made one substitution, Benko instead of Dominik Glavina.

42 GOOOOOOOOOOOOOOAAAAL! Hajduk leads 1:0, Bassel Jradi scored! He first took a corner kick and sent a short pass to Tahiraj, he provided him a nice return pass and Jradi easily scored.

15 Referee Tihomir Pejin will use VAR to check whether there was handball in the penalty area.

13 Great chance for Hajduk! Caktaš shot from the verge of the penalty box, Nevistić cleared the danger but only until Eduok took another shot, which this time ended on a goal post.

11 Jradi took the second corner kick for Hajduk, he passed to Ismajli but Varaždin defenders cleared the danger in the last moment.

1 The match in Varaždin has started. Good luck Hajduk!a