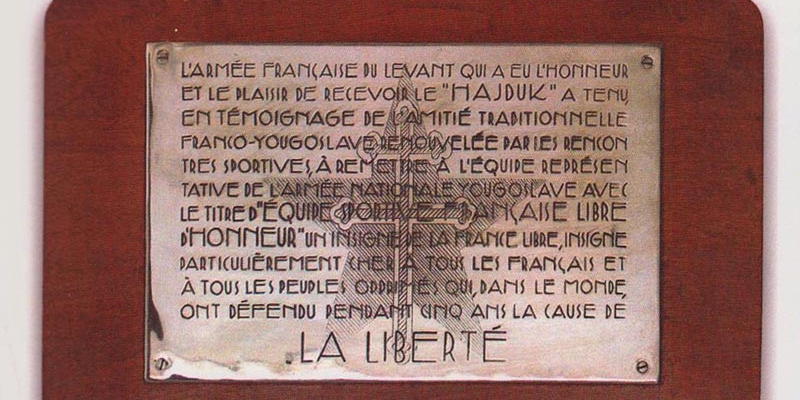 This day in history: 70th anniversary of De Gaulle's award to Hajduk

Renew your membership for 2023!

On this day, May 27, 70 years ago one of the most glorious days in the history of Hajduk happened. On that May 27, 1945 Hajduk was decorated with a title of Team of Honour of Free French Republic.

In those wartime days Hajduk was much more than a sport club. On May 7, 1944 it was re-assembled as a team of the antifascist resistance movement, with the whole team gathering at the free territory on the island Vis. The date was not just any date, but Saint Domnio's Day, when Split celebrates its patron saint. After the reunion, Hajduk started a 100-day tour which lasted by the end of the World War 2, under the name Hajduk JA (JA standing for Yugoslav Army).

The most memorable moment of that part of Hajduk's history was the match that took place on September 23, 1944 in front of 40 thousand people at San Nicola stadium in Bari, Italy. That day Hajduk played against British Army team, made of professionals from English and Scottish teams and lead by Stan Cullis, a pre-war England's captain.

A series of matches in Africa and Asia followed, with the match with Lebanon in Beirut on May 27, 1945. Just before leaving Lebanon, chief commander of French forces army general Albert Humblot gave a reception for Hajduk and its leadership. On that occasion, French high officer, authorized by General Charles de Gaulle, awarded Hajduk with a title we mentioned for its merits in War, declaring it an Honourable Sport Team of the Free French Republic.