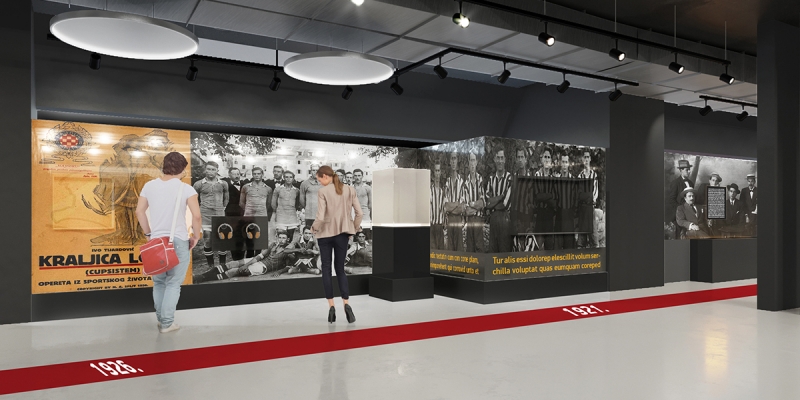 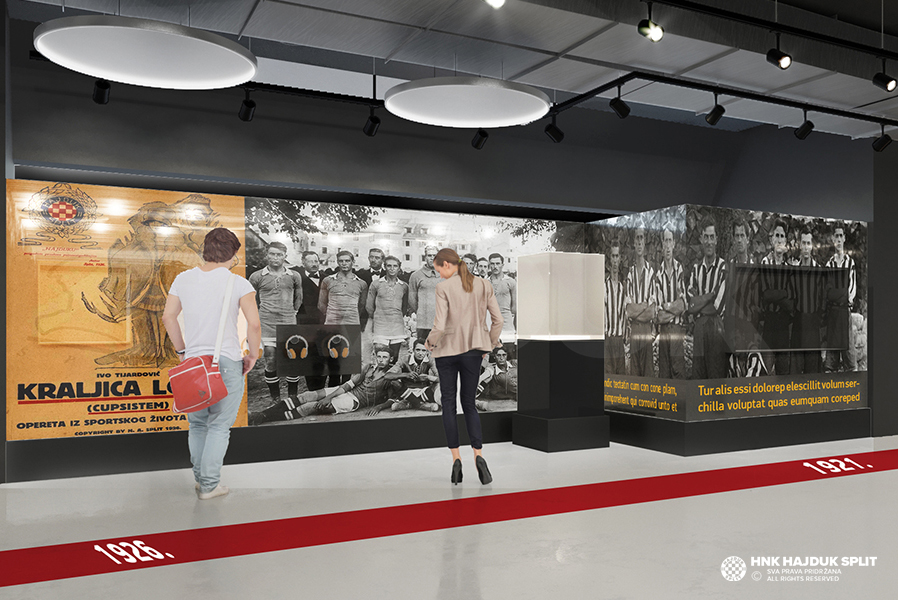 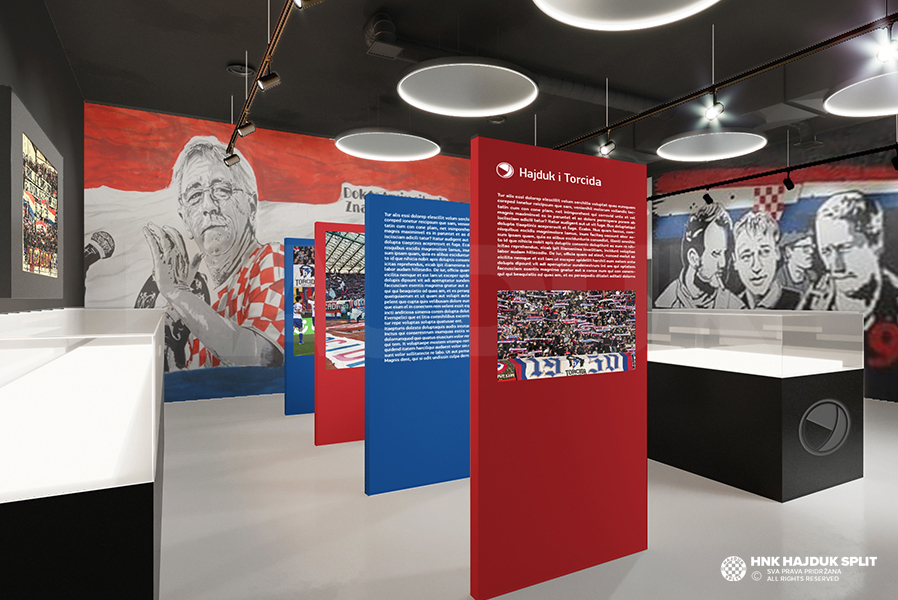 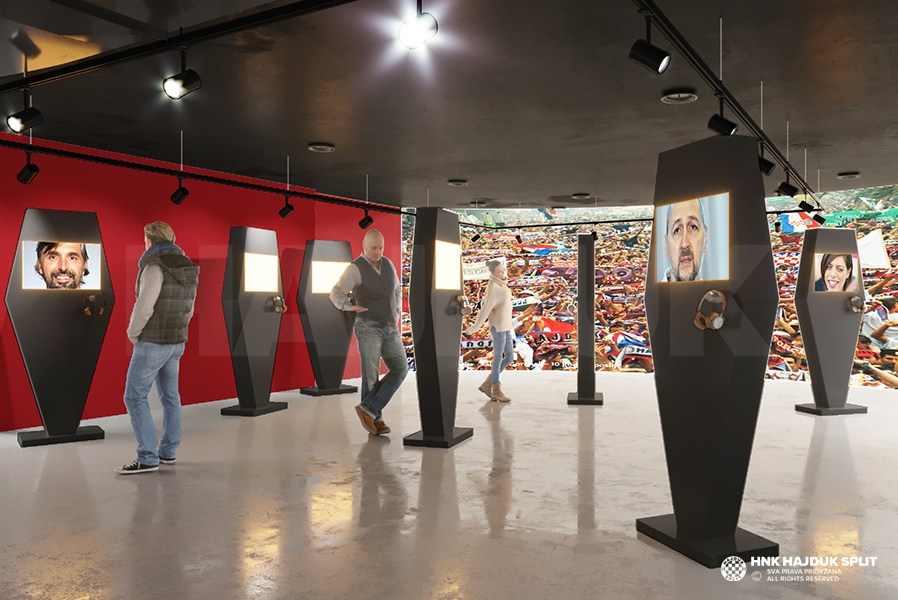 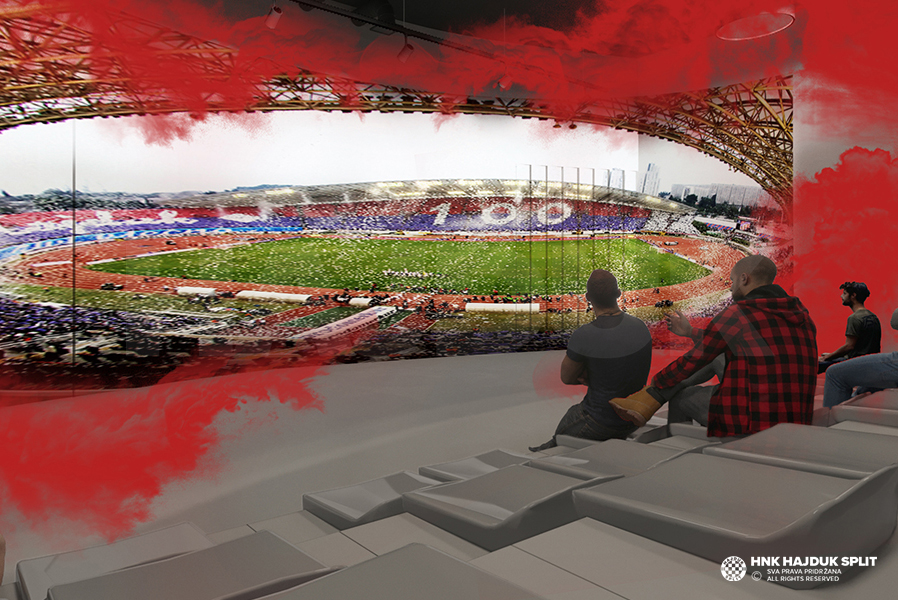 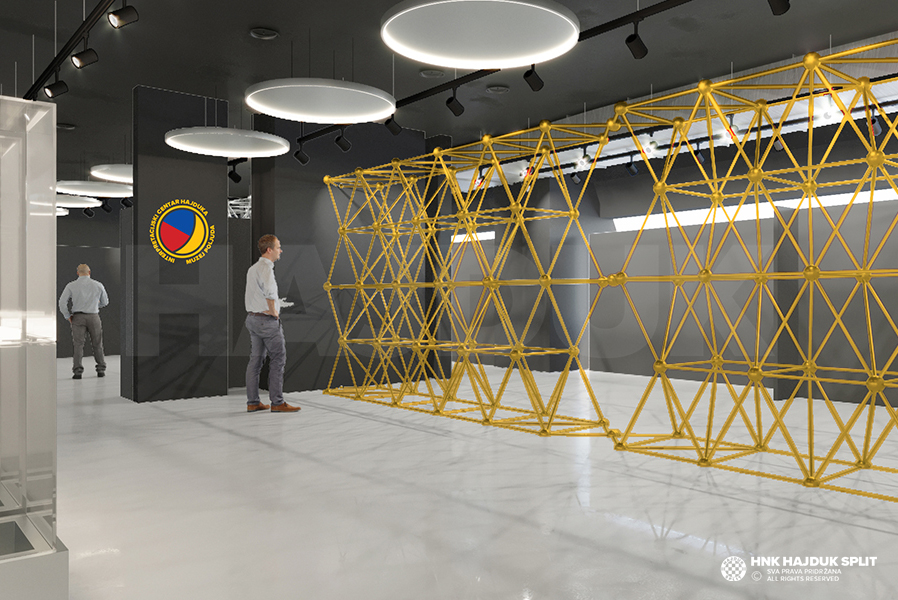 Poljud Museum and Hajduk Interpretation Center will occupy approximately 2,500 square meters of space, located below the East stand of Poljud Stadium. Through a series of interactive interpretive elements on three floors (basement, ground floor and first floor), visitors will learn the centuries old story of sport in Split and Hajduk and the unique architectural story of our stadium - Poljud beauty.

The biggest challenge for the project team was certainly to interpret and present to the visitors the unique relationship between the Club and Split and Hajduk fans in general, which is specific, almost phenomenological connection that is created by birth and never breaks.

It is these topics that open the story of Hajduk. Through the first topics 'Idea and Genesis' and 'A Brief Overview of the History of Sports in Split', visitors will be introduced to Split's sporting beginnings, the development of the most important sports and sports clubs, trophy historical moments and the most important athletes throughout history. Fabjan Kaliterna, the initiator of the development of a series of sports in Split, is also represented. After exploring the rich sports history, visitors will be presented with a series of interactive content as a key theme of the set-up - the relationship between the fans and the Club through the 'Outside view' theme. First of all, through the testimonies of numerous famous and trophy Split athletes who talk first-hand about what it was like to do the first sports steps in Split and how the city rewarded and celebrated their greatest sports achievements. It will also tell the story of the city's specific attitude to sports in general. Apart from presenting Split as a sports city through these stories, they will also give a visitor an insight into the special sports heart of Split, the habit of citizens to celebrate with their athletes their greatest achievements and to organize massive celebrations for their trophy athletes. This element of interpretation is crucial to understanding the relationship between Split and Hajduk, which rests on the aforementioned mutual appreciation, but is far deeper and more specific. Visitors will understand this relationship and its features in the 'Inside View' theme, which will offer a series of testimonials from fans who will talk about why they love Hajduk and what role this Club plays in their lives. These will be intimate confessions, personal perspectives, emotions through a specific multimedia platform. The introductory stories conclude the first stage of the setup, which continues on the first floor.

First floor is reserved entirely for Hajduk history. Through introductory stories in the theme 'Development of the Club's crest and jersey over time', through presenting the most important facts from the Club's past and interactive multimedia systems, visitors will search the Club's entire long history, the most important persons - from the founders to the players and coaches through 'Hajduk 1911 to today'. The founding of Torcida supporters group, an integral part of Hajduk, is also interpreted in this topic. The interpretation will be placed on specific visual platforms that accompany the time decades. Visual platforms are a kind of homage to the unique construction of Poljud roof, built by the MERO technique. The same technique is applied in the implementation of the aforementioned visual platforms, which are also unique in the world.

After learning about the Club's history, visitors go down into the basement, which has a kind of showroom setup. In this section, the topic "The Museum of Poljud" presents the origin of the idea and the construction of Poljud Stadium. The topics are 'Historic Retrospective', 'Hajduk and Torcida', 'Torcida Feeling', while the latter offers the possibility of a personal experience by showing the cheering from the North stands or the most attractive choreographies of Torcida, a space equipped as a 9D cinema.

The basement also has a corridor through which visitors can enter the East stand or take a tour of the stadium and Club premises. It is important to note that visitors are allowed to constantly update the setup through booths where they will be able to record their testimony of Hajduk and Split experience, or comment on any Hajduk match, and the content will then be played on one of the screens in the facility.

With accompanying facilities - a Souvenir shop/Fan shop, multifunctional halls for various exhibitions, lectures and games, a tasting room designed after the Prague beer pub 'U Fleku' where Hajduk story began - the Museum of Poljud and Hajduk Interpretation Center will be a place with attractive, educational and interactive content that presents the unique story of our Club.