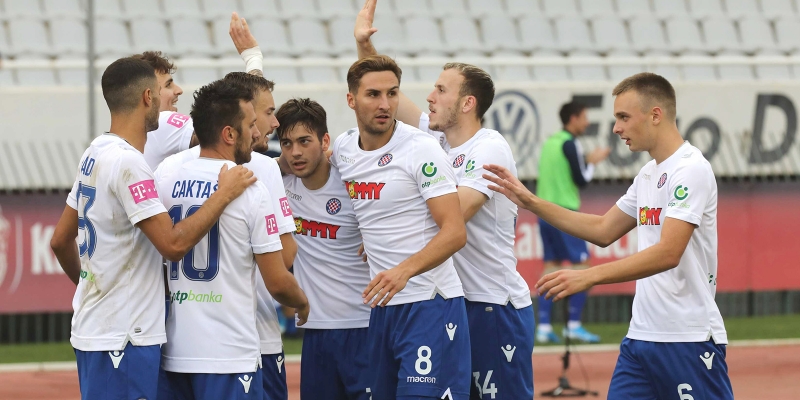 90+3 End of the match at Poljud. Hajduk beat Inter from Zaprešić 3:1. Well done!

90+2 Mazalović sent off after a second caution for a foul on Bradarić. Inter will play the remaining moments with 10 men.

90 Inter making the last substitution, Mitrović on, Serderov off.

86 GOOOOOOOOOOOOOOAAAL 3:1 Jairo! Inter goalkeeper made a mistake, his punch was too short and Jairo got possession, he passed to Caktaš who could have shot from 13 meters but he returned to Jairo who easily scored from a better position.

61 Inter making the first sub, Galić on, Vega off.

60 Bradarić's powerful shot from 16 meters following a corner kick was blocked by the away defenders.

49 Serderov scored for 2:1. Hajduk lost possession in the middle, Inter's forward ran towards the goal on the left side and scored.

47 GOOOOOOOOOOOOOOOOAAAL Stanko Jurić immediately scored for 2:0! Jairo crossed to Caktaš, who passed to Jurić and he scored immediately after entering the game as a substitute on half-time break.

46 The second half has started, Hajduk made one substitution, Jurić on, Hamza off.

45+1 End of the first half. Hajduk leads 1:0 thanks to Mijo Caktaš, who scored from a penalty kick in the 42nd minute.

32 Čolina dribbled past three Inter players and sent a return pass but none of his teammates was at the right place.

13 Juranović crossed to Jradi, his attempt from 12 meters ended up in the back of the net.

10 Inter is defending with 9 men while only Serdarov is outside their penalty box, Hajduk dominates possession but no danger for the away team so far.

1 The match at Poljud has started, good luck Hajduk!