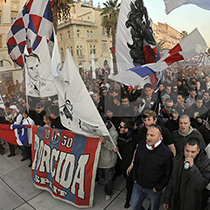 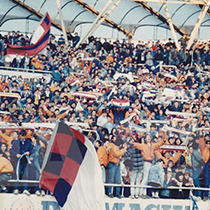 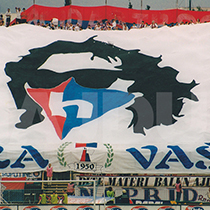 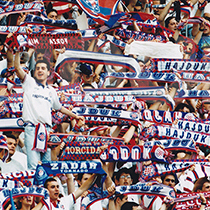 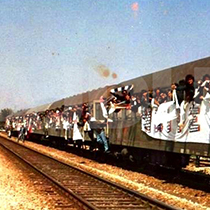 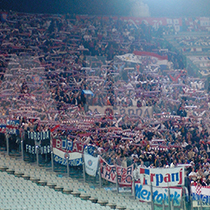 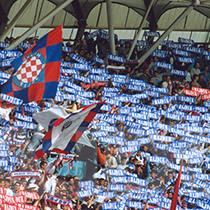 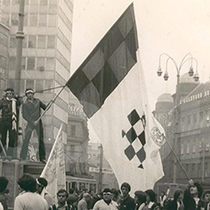 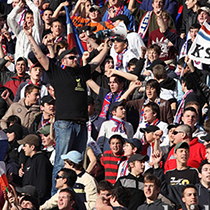 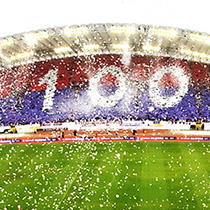 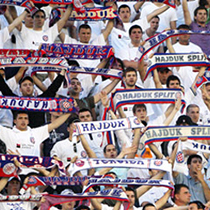 The History of Torcida

In the wake of the Second World War, there was widespread interest in sports, primarily football, throughout the former Yugoslavia. Clubs newly formed on the foundations of the old citizens' clubs, such as Dinamo, Red Star, or Partizan, soon matched the quality of teams whose tradition was continued unbroken, such as Hajduk or Sarajevo. The middle years of the century saw highly contested football competitions, with the title often decided on the last matchday. One such game was played in Split on October 29, 1950, when Hajduk and Red Star met in Split to decide the League of Yugoslavia.

In that year, football's popularity gained a new impulse due to a very exciting World Cup being played in Brazil. It was marked by play of a high standard, but no less so by the temperamental support of Torcida, the most avid and engaged Brazilian fans. The highly attractive "southern" atmosphere at the Maracana and other Brazilian stadia made a deep impression on a group of Hajduk fans who were at the time university students in Zagreb. Their excitement grew as the league D-day approached, understandably so as the opponents were archrivals Red Star and the game would be taking place in Split. They came to a decision that a Split Torcida needs to be formed, so as to loudly cheer the Whites onto the title, just as it was understood that the Brazilian fans' support played a key role in their team's victories. The initial nucleus of this group was 113 students and other young men, mostly of Dalmatian origin, but they included also Hajduk fans from across the country.

With the assistance of the University Youth Committee, thousands of students and other Hajduk fans came from Zagreb to Split to attend the derby. The last of several packed trains arrived in the early morning of October 29, a navy brass band greeting it at the station. The entire city was on edge, anxious for the game to begin already. A large detachment of fans positioned themselves, at the break of dawn, just outside the hotel where the Red Star team was staying. They caused an unearthly amount of noise using sirens, bells, horns and assorted devices…

In the early 1970s, a small group of hardcore Hajduk fans began to gather regularly in the center of the east stand and coordinate the chants from this position. Although somewhat few in number, it was members of this group who spread the new, modern style of supporters' chants. The self-consciousness of fans increased a great deal in this period, and the "southern" style was adopted by young Hajduk fans during the 1970s. This meant a large number of club flags and banners (signifying their gathering places on the stands), great parades around town on the eve and after important matches bearing this insignia, etc. The simple repertoire of chants was now increasingly expanded into the singing of club anthems and self-penned support songs. Similar to other fanclubs, the most eager fans, that is those that met in the middle of the Stari Plac east stand, began to regularly attend Hajduk away matches

In the mid- to late 1970s, this core of fans, as yet homogenous, began to meet on non-matchdays, thus initiating a new youth lifestyle. The common venues of their meetings were Riva, that is Split's promenade, and the Dubrovnik café, which became an unofficial "headquarters" of local ultras.

The mid-Eighties saw football fanclubs mushroom all over the former Yugoslavia. This was the case first and foremost with the most popular teams, and their rivalries were a major influence on patterns of fan behavior. In the late Eighties, competition between the fanclubs became as important to its members as the actual football competitions taking place on the playing field. No effort was spared in attempting to prove which fanclub was the best, "the toughest," "the craziest," etc. The ultimate challenge in this respect, one that proved a fanclub's mettle beyond doubt, was its team's away matches. Violent clashes and other incidents were a particularly common occurrence when Torcida would travel to Belgrade.

In the mid-Eighties an alignment of fanclubs along national lines first became apparent. A prominent example was the coordination between Torcida and the Bad Blue Boys (the Dinamo Zagreb fanclub.) Detachments of Torcida were commonly seen at Dinamo's important home games, and even their away games, particularly if these were taking place against the Belgrade teams Partizan and Red Star. This was seen as an attempt at fraternalization, the forming of an alliance in a perceived future conflict against the common enemy.

When Serbian aggression against Croatia began in the 1990s, many members of Torcida joined the homeland defense and saw active duty in the front. In the early years of Croatian independence, Torcida was manifestly unwilling to engage in any destructive behavior which might set Hajduk back. This was a period of unprecedented success for Hajduk, which won most of the trophies in the early years of Croatia, and managed to reach the last eight in Europe. The latter achievement remains to this day unmatched by any club since independence and the formation of a Croatian League.