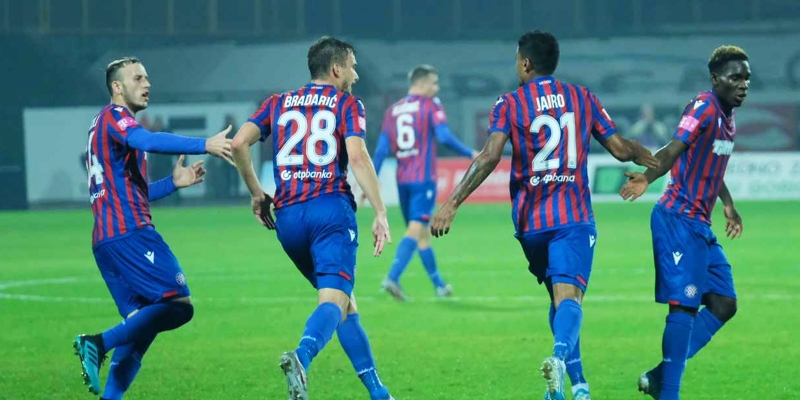 90+3 Suk sent off after the second caution in the match.

84 Juranović crossed to Čolina, who tried a volely from 15 meters, Kahlina clears the danger, this was a good attempt on goal.

83 Hajduk making the second substitution: Jradi on, Hamza off.

70 Juranović crossed to Caktaš, his attempt from 12 meters went off target.

60 Good chance for Gorica. Lovrić took a corner kick, Suk was waiting on the far post, Posavec saved his header.

39 Jairo tackled Steenvoorden and tried to cross to Caktaš on the far post, Kahlina was ready and intercepted that pass.

33 Following a corner kick, Bradarić's low shot from 20 meters was saved by Kahlina.

28 GOOOOOOOOOOAAAL 1:1 Jairo scored an equalizer from 12 meters on Bradarić's assist.

15 Nejašmić's attempt from 20 meters was not too demanding task for goalkeeper Kahlina.

12 Gorica leads 1:0. Lovrić scored from a free kick after a foul that took place at some 25 meters.

2 Great chance for Hajduk! After a nice action, Jiruć passed to Caktaš but Kahlina saved his attempt. Corner kick awarded to Hajduk.