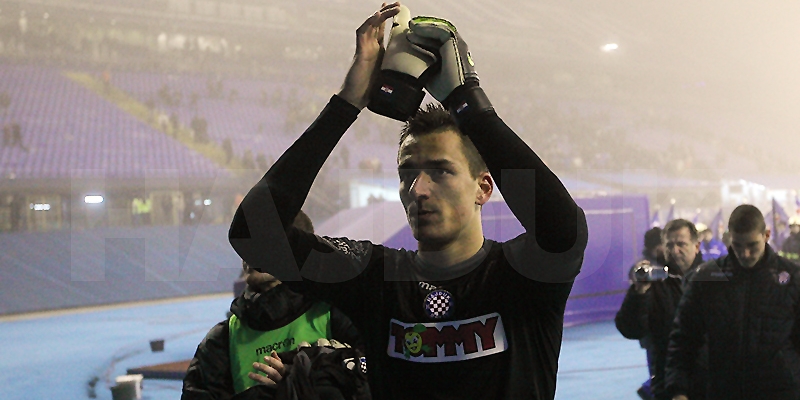 Thank you Lovre and good luck!

Lovre Kalinic is no longer a goalkeeper of Hajduk! After 134 official appearances in seven First league seasons in Hajduk's jersey, now already a former captain of Hajduk and Croatian national team player leaves Poljud for the highest goalkeeper transfer fee in the history of Croatian First League.

"In Hajduk I gained goalkeeping name and reputation, became the national team player and also became interesting to European clubs. One year ago, my transfer for which we were all convinced that it's done in the end was not realized and you know specific goalkeeper transfers are. I stayed calm and patient, and the Club has given me everything in accordance with their capabilities. I continued to work when I got the offer from Gent with which we are all satisfied" said Lovre on the occason of his farewell from the favorite Club and added:

"I have 26 years, I've been in Hajduk for 17 years, so I think it's time for a new step. I have played a lot of good matches for Hajduk and ensured a good transfer, but I repeat, Hajduk gave me everything and I will be the Club Ambassador from now on. Split is my city, Hajduk is my club and I'll be back sooner or later. My successors Dante Stipica and Ivo Grbic are great goalkeepers and I am convinced that, like almost always in Hajduk, goalkeepers will be a reliable part of the team. Gent is a new challenge. The money that they provided is a proof that they appreciate me as a player and I believe we will do great things together" said Kalinic.

"Kalinic was our captain, national team player and best player. Certainly, every President wants such a player in his team which is why we have recently signed a contract with him with the best conditions that we can offer, but after 134 matches, Lovre wanted to go and the Club understands it. There was a concrete offer from Gent and what satisfies us is that we have two goalkeepers for which it is estimated that they can meet the demands. Lovre is not leaving as a young player, he comes to his new club as a star. I think it is a good guideline to all those who rush to leave. I want to wish Lovre a successful continuation of his career and I am sure that he will confirm his clas against the biggest clubs too" President of the Board Ivan Kos thanked Kalinic for his contribution while he was wearing Hajduk's jersey.

"Last week I pointed out that we will not force anyone to stay. All those who want to leave can, but of course under our conditions. Kalinic has seven First league seasons behind so I understand that he wants new challanges. He is the best goalkeeper in the League and meant a lot to our team, but we have two good goalkeeper that will replace him. Goalkeeper transfers strongly depend on the market situation and only a few clubs are able to offer such transfer amount the amount as Gent did. Kalinic's transfer is a good deal for Hajduk, and it's on us that the team and our competing ambitions do not suffer because of that" Sports Director Mario Branco commented the transfer.

For Hajduk, Kalinic played 11 962 official minutes, 50 times his goal remained intact. Lovre is also the club's record holder with 775 minutes without conceding a goal in the First League matches. The record was set from August 10, 2015 to October 24, 2015 when he didn't concede a goal in eight consecutive matches.

Two years in a row, he won the Football Oscar as the best MAXtv First League goalkeeper and has six appearances for the Croatian national team.

Lovre, thank you for everything you gave to Hajduk, we wish you good luck in your future career!