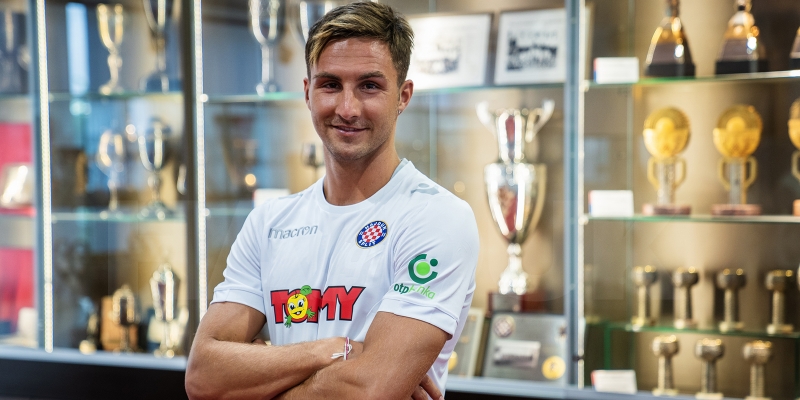 HNK Hajduk is pleased to announce that an agreement with AC Milan was reached regarding the transfer of football player Stefan Simić who signed the contract with Hajduk until June 30, 2023.

"We managed to agree very favorable conditions with AC Milan, we brought a young player with a rich football experience in Italy and Belgium. When engaging players, we need to work on a feeling of belonging, seeking those players who have a winning mentality and who feel honored to wear the Club's jersey. In addition, Stefan has an exceptional potential that, due to the lack of continuity, he has not yet fully expressed. I think he will quickly adapt because he is familiar with the atmosphere and the mentality of this specific area. We are thinking in the long run and with Simić's arrival we have consolidated defensive positions, and it is possible that by the end of the transfer period, some players who play in those positions might leave" said Sports Director Saša Bjelanović.

Simić is a 24-year-old Croatian national who plays for the Czech Republic since he was born in Prague, where he started a football career with Slavia Prague. He played regularly for all the youth Czech national teams and in November 2017, he debuted for their A national team in the victory against Qatar.

From Slavia he moved to the Italian Genoa CFC, from where he soon went to AC Milan, with whom he signed a professional contract. Then he went on loan with Italian Varese Calcio, Belgian Royal Excel Mouscron and then again in Italy at FC Crotone and Frosinone Calcio. She collected over 60 senior caps.

Stefan arrives in Hajduk after a successful deal between the two clubs, as he had  a contract obligation with AC Milan for another year.

"I chose Hajduk because I liked the project presented by Sports Director Saša Bjelanović, but also because I've always been a great fan of Hajduk. All my life my father raised me like that, Hajduk has always been the most important club in our house, I feel great in Split, it's my home and I'm really happy to finally realize one of my childhood dreams. My goals are the same as the goals of Hajduk, only the best for us, only the winnings matter, we are the biggest club in Croatia and I hope I will present it well and the best I can" said Simić, who will wear the shirt number 8.