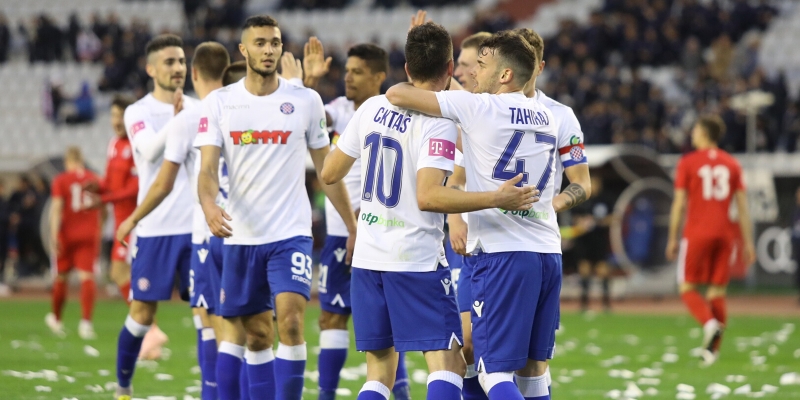 90 Svatok cautioned twice in two minutes and sent off.

80 GOOOOOOOOOOAAAL 2:0 Jairo! Jradi passed to Jario from the right and he shot to the left side of the goal, goalkeeper couldn't save.

77 Caktaš took a free kick from some 20 meters, but it went wide.

75 Jairo crossed along the left wing and tried to pass to Delić, who was coming from the opposite side, goalkeeper Banić reacted on time.

71 Delić alone in the penalty box, he shot from 14 meters but it went wide.

69 Rudeš's substitution, Božić on, Kovačević off.

58 Jurić on, Palaversa off for Hajduk.

46 The second half has started at Poljud. No substitutions during the half-time.

45 Tahiraj passed to Jairo, his shot was not on target.

42 Pasariček passed to Kovačević, who shot from some 15 meters, Posavec was in place but this attempt went wide in the end.

32 GOOOOOOOOOOOOAAAAL 1:0 Caktaš! Nejašmić sent a long pass, some player of Rudeš cleared the danger but Tahiraj got to the ball first and shot on goal, Caktaš was right in front of the goal and hit the ball inside the goal.

30 Caktaš passed to Bradarić. whose attempt from 15 meters went wide.

28 Palaversa sent a long pass to Tahiraj but he didn't manage to shoot on goal.

17 Caktaš's attempt ended up on the outside of the goal net.

9 Jradi jshot from 10 meters but it didn't enter the goal, then Tudor shot from 18 meters and it went wide.

5 Jairo slipped in the moment when he was planning to shoot on goal.

1 The match at Poljud has kicked-off, good luck Hajduk!!!