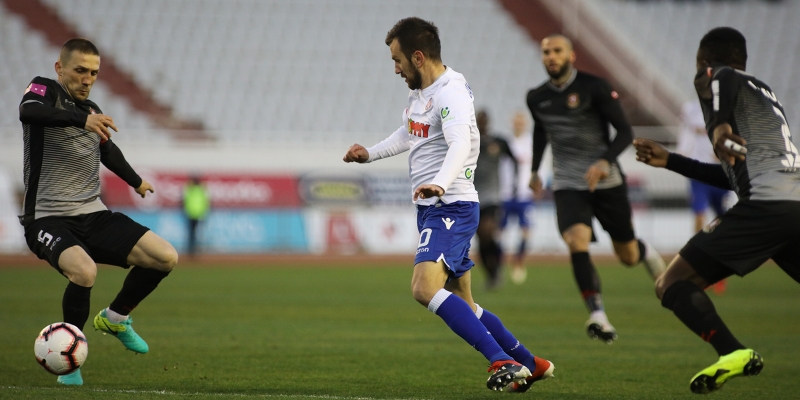 90+1 Caktaš passed a header to Gyurcso, whose attempt from 13 meters went wide.

89 Great chance for Hajduk! Lopez passed to Caktaš who tried a header from 9 meters, it went wide.

85 After a corner kick, Ismajli shot from 12 meters, his attempt was blocked. Another corner kick awarded to Hajduk.

84 Hajduk making the last change: Šego instead of Jairo.

79 Gyurcso passed to Caktaš, the ball was too fast and it went out of play.

69 Another substitution, Sahiti on, Kalik off for Hajduk.

68 Gorica substitution: Ndiaye on, Dvorneković off.

59 Palaversa took two consequent corner kicks. His first attempt was cleared by Marina, while the follwoing corner kick was directed towards Nejašmić, who didn't manage to shoot.

50 Jairo passed to Kalik who shot from 13 meters, Kahlina saves.

45 Miya shot from a tough position at 15 meters, it was a good attempt but Posavec saved.

39 Juranović passed to Caktaš who tried a header from 12 meters, Kahlina saved.

37 Greatest chance for Hajduk so far. Tudor passed to Jairo, he shot from a few meters but it went wide.

36 Tudora crossed along the right side and passed to Jairo at seven meters, he was in a good position but his attempt was not precise.

32 Kahlina clears the danger coming from Tahiraj, Kalik shot from 25 meters on an empty goal but his shot lacked precision.

16 Gorica threatened, Josip Posavec saved. Lovrić passed to Zwolinski, who ran towards the goal alone but Posaved reacted timely and saved what would have been a goal for Gorica.

13 Tahiraj managed to dribble along Gorica defenders and passed the ball within 16 meters but there was noone to shoot.

4 Caktaš sent a long apss to Ismajl, but Musa clears the danger in the last moment.