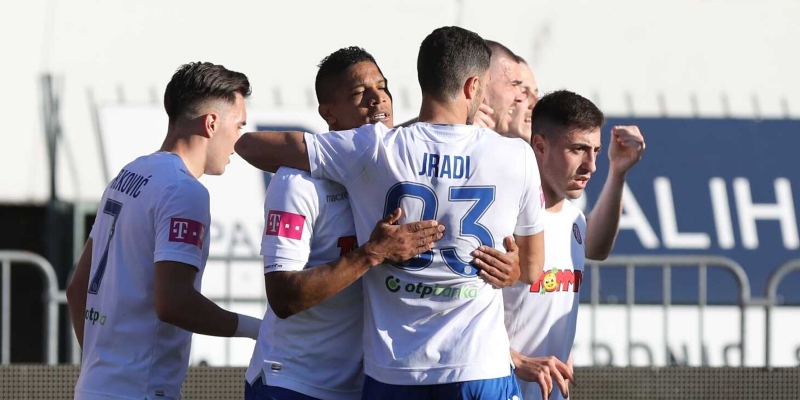 90+3 End of the match, Hajduk convincingly beat Gorica at Poljud, the final result is 6:0. Congratulations Hajduk!

68 Kreković scored a fantastic goal but due to VAR intervention, the referee disallowed the goal due to offside position.

There are 8487 spectators at Poljud today, of which 727 on the Family stand.

60 No penalty kick will be awarded to Hajduk, the game continues.

59 The referees are currently checking whether Hajduk shall be awarded another penalty kick.

56 GOOOOOOOOOOOOAAAL 5:0! Jairo scored from a penalty.

54 Kalik fouled Ismajli inside the penalty box. Hajduk shall get a chance to score another goal.

49 Jairo shot from 15 meters after he found himself in a good position for that, Kahlina saved.

46 The second half has started. Gorica made one substitution, Golubickas instead of Periša.

45+2 End of the first half. Hajduk  currently leads 3:0, goalscorers: Kreković, Jairo and Caktaš.

39 GOOOOOOOOOOAAAL 3:0 Caktaš! What a nice goal! Jairo dribbled past two Gorica defenders, crossed to Tahiraj, he then passed to captain Caktaš who only touched the ball and scored easily.

35 GOOOOOOOOOOOOOOOOOAAAL 2:0 Jairo! jairo first tackled the ball and then ran towards the goal, he dribbled past a Gorica defender and goalkeeper and easily scored.

12 GOOOOOOOOOOAAAL Hajduk leads 1:0, Kreković scored his first goal for the first team on the assist of Caktaš.

10 Kreković scored for Hajduk's lead, VAR is still checking if there was an offside position, as it was suggested by the assistant referee, or the goal was regular.

1 The match at Poljud has started, good lock Hajduk!