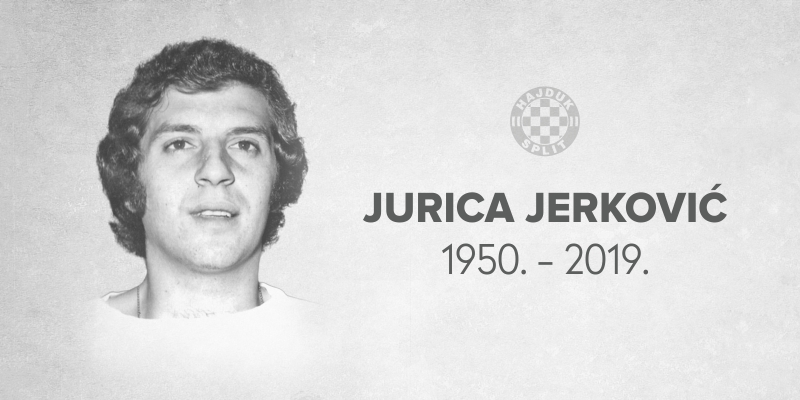 Jurica Jerković, one of the greatest footballers in the history of Hajduk left us today at the age of 70, following a long illness.

The leader of Hajduk's Golden Generation for sure deserved a special place in the history of Hajduk, which is something reserved only for the chosen ones. He said goodbye to the white jersey on August 1, 1978, after the match Hajduk - Aston Villa. The teammates carried him on their shoulders with tears in their eyes from Stari Plac stadium. He went to the Swiss First League club Zürich for which he played from 1978 to 1984. Afterwards, he also played in FC Lugano. For two consecutive years, 1982 and 1983, he was named the best foreigner in the Swiss football.

In 1983, he achieved another great thing in Zürich . He was chosen the team captain. For the first time in the history of this Swiss club and Swiss football history in general, one foreign football player took the captain's armband.

He was the true football expert and he played 43 matches for the Yugoslav national team from 1970 to 1981   - 42 as a Hajduk player, one as a Zürich player - and scored six goals. He debuted in Belgrade on April 12, 1970 in a friendly match against Hungary (2:2), and he played the last match on December 29, 1981 in the World Cup qualifiers against Greece in Athens (2:1), also scoring his last goal for the national squad. He is a participant of two World Cups in 1974 in West Germany and in 1982 in Spain, as well as the 1976 UEFA Euro in Zagreb and Belgrade.

He is the winner of the Yellow Shirt award for the best football player of Yugoslavia in the seasons 1970/71 and 1975/76. Football history specifically remembers his two goals. The first was in the last Championship game of the season 1973/74 against OFK Belgrade at Karaburma. He scored in the 90th minute, thus securing Hajduk holds the title of the Champion.

The second goal was at Brazilian stadium Maracana on July 18, 1971, on a famous Pele's farewell to the professional football. At the half-time of this match, Vujadin Boškov sent him to warm up. He soon entered as a substitute and scored a 2:2 equalizer. He enthralled the audience with a volley from about 25 meters. The following morning, Brazilian newspapers issued a statement by Alberto Carlos, the renowned Brazilian defender: "The Yugoslav national team is the player number fourteen". Jurica wore a shirt number 14 on that match when the greatest footballer that the world had ever had, the legendary Pele, said goodbye to football.

He also played a friendly match in 1987 for the World team, together with Maradona, Boniek, Branco and Dirceu.

Maybe only a few people in the football world can boast of playing against both Pele and Maradona.

After finishing his football career, from 1986 to 1990, he was the Director of Hajduk.

He is the winner of many  Hajduk's acknowledgments, of which we specifically emphasize the Golden Captain's Armband. During his playing career, in February 1975, he also had an honour of laying the cornerstone of the new Hajduk's stadium at Poljud.