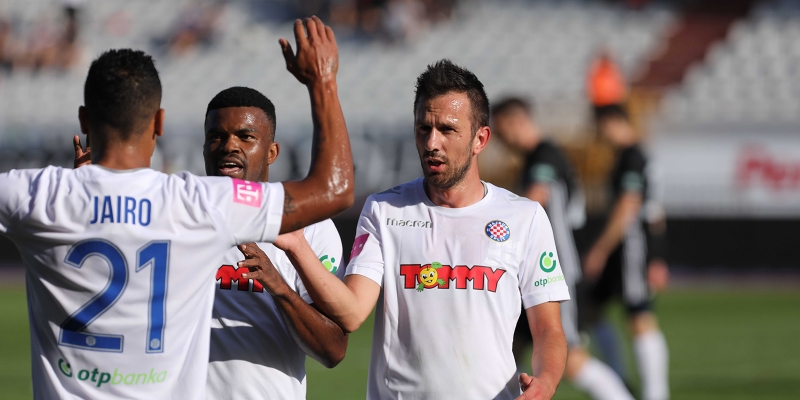 88 Hamza again, now he shot from 22 meters but his attempt went wide.

74 Very exciting 20 seconds at Poljud. Posavec first saved Glavčić's attempt, while the away team was protesting and questioning whether they scored or not, Hajduk started a counter-attack, Jradi crossed to Juranović and he scored the empty goal for 2:0.

65 Another chance, Caktaš shot from 16 meters, his was not precise enough.

64 New chance for Hajduk. Caktaš crossed to Jairo, his lob was not successful.

62 Hamza passed to Ismajli, away team defense clears the danger.

46 The second half has started, go Hajduk!

38 Hajduk could have scored another goal, Jradi tried a volley from 12 meters following a corner kick, Slaven's defenders cleared the danger right at the goal line. Simić tried another time but his attempt went wide.

32 Nejašmić in a great solo action, he dribbled past two Slaven players and then resisted a bit before he shot, the ball left the field. Hajduk's midfielder in the end didn't manage to shoot.

14 Jairo scored after a great Hajduk's action. Hamza first passed to Eduok, who crossed to Caktaš, in the end he passed to Jairo and Hajduk's Brazilian scored for a 1:0 lead. Well done Hajduk!