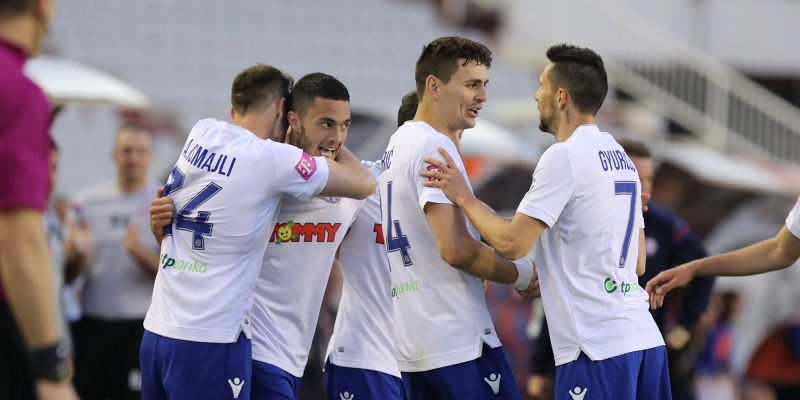 77 Hamza's shot from 18 meters was blocked and went wide.

66 GOOOOOOOOOOOOOOAL 2:0 Jairo scored after a great Hajduk's action! Nejašmić crossed to Gyurcso who passed to Caktaš in the middle and he passed to Jairo on the left, the Brazilian dribbled past Slaven's defenders and scored the opposite goal angle from 13 meters.

There are 6904 spectators at Poljud today. Thank you!

52 Hajduk had another chance to score. Gyurcso crossed to Jairo who was in the right position but Slaven's defender cleared in the last moment.

51 GOOOOOOOOOOOOAAAL 1:0 Jradi! Gyurcso  crossed in the penalty box, Slaven's defender deflected at 18 meters, right to Jradi, who scored a volley to the right side of the goal.

46 The second half has started, duribng half-time Hajduk made one substitution, Gyurcso instead of Tudor.

35 Jairo was in a promising situation but Bongongui clears the danger in the last moment.

30 Josip Posavc once again had a great intervention. Bongongui passed to Lima who had another great chance to score but Hajduk's goalkeeper came out as a winner.

22 Bradarić crossed to Jairo at five meters, he was not in a good position but won another corner kick for Hajduk.

14 Great chance for Hajduk. Jurić crossed to Caktaš who tried a header from 12 meters, Filipović saves.

10 Međimurec tried a header after a free kick, it was a good position from some seven meters but Posavec collected another great save.

2 Jurić crossed to Jairo from the right, he passed to Caktaš in the middle but his attempt was blocked. Corner kick for Hajduk.