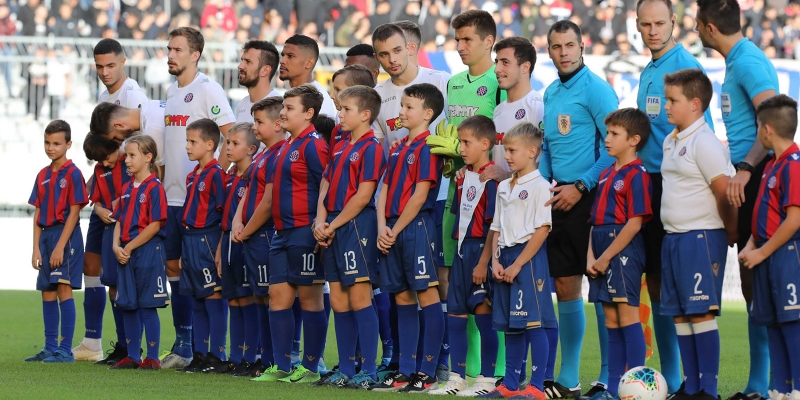 78 Jurić on, Caktaš off for Hajduk.

75 Osijek substitution: Mbakogu on, Mance off.

74 Mario Vušković sent off from the substitute bench because of protesting.

73 Referee Igor Pajač cautioned Jairo for kicking the corner flag while he was celebrating the goal. It’s his second caution today and Hajduk will have to continue the match with 10 men.

There are 7805 dprctators at Poljud today, of which 485 on the Kids stand. Thank you!

53 Nejašmić shot from 20 meters but his attempt went off target.

53 Osijek scored an equalizer. Marić shot from 20 meters and scored.

46 The second half has started. Hajduk made one substitution during half.time, Hamza instead of Bradarić.

45 Osijek defenders made another mistake, Jairo tackled and hit the goal post. Hajduk could have scored another goal.

41 Osijek defenders made a mistake, Eduok easily scored for 2:0.

37 Caktaš took a free kick that ended cleared by the defensive wall, Eduok’s next powerful attempt hit Igor Silva in chest, he fell to the ground but soon he continued to play.

34 Jairo crossed to Eduok, he found Jradi with a return pass, Jradi’s shot was not precise enough.

22 GOOOOOOOOOAAAL 1:0 Caktaš! Čolina tackled in the center and passed to Jairo on the right, Caktaš was waiting at 13 meters and scored for Hajduk’s lead on Jairo’s assist.

11 Pilj shot from 17 meters following Osijek’s fast transition after a successful tackle in the center. His attempt went wide.